Cor-Ten sheet facade cladding? Here are the pros and cons

Cor-Ten sheet facade cladding naturally changes its appearance over time, it is resistant to atmospheric agents, producing an extraordinary oxide finish that protects it from corrosive phenomena. In fact, rust creates a surface coat that constantly regenerates itself and allows the facade cladding to “protect itself”, offering a highly durable and low-maintenance solution.

Designers and planners have the possibility of imagining continuous surfaces capable of establishing a visual dialogue with the surrounding environment, thanks to the ability to gradually change their appearance over time, using that “formal language” typical of steel, and exploiting above all the its ornamental characteristics.

Today Cor-Ten is used in architecture as if it were a tailor-made covering, such as a fabric, cut, folded, “stretched” and decorated with inlays and processes that enhance its elastic qualities.

COR-TEN STEEL AND ITS CHARACTERISTICS

Cor-Ten (also known as weathering steel) is a trademark registered by the American company United States Steel Corporation which identified a particular metallic material developed in the 1930s. Its name derives from the physical properties of this type of steel: corrosion resistance (COR) and tensile strength or tenacity, (TEN).

Cor-Ten steel is mainly an iron and carbon alloy which includes, in small quantities and less than 5% of the total metallurgical composition, metals such as copper, chromium, nickel, phosphorus, silicon and manganese. The characteristics of strength and corrosion resistance, which make Cor-Ten such a popular choice. All possible thanks to its structural composition and the particular distribution and concentration of the alloy elements added to steel during the production process. These act to reduce the carbon content and give a greater load capacity, and above all assigning an exceptional resistance to corrosion.

THE OXIDATION PROCESS IN COR-TEN CLADDINGS

Cor-Ten metal is designed to reach a stable oxidation point, in which any further alteration process does not affect the quality of the steel, although it changes its colour over time.

However, it is difficult to predict the final colour of the weathered Cor-Ten cladding precisely because of its extremely reactive surface. Indeed, there is no guarantee that the colouring will be homogeneous over time.

The colour evolution of the coating created on the panels varies and depends mainly on external environmental factors, such as:

To obtain an efficient anti-rust cladding, that is to have a homogeneous and uniformly distributed self-protective coat, the metal surface requires an alternating cycle of wet and dry conditions.

Rainwater and humidity activate the oxidation process. As it dries, the oxide coat begins to release water particles, forming an adherent and compact layer with low permeability. The amount of oxide produced following exposure to the elements tends to decrease over time and, even if the process does not almost completely stop, the coating could eventually lose its corrosion protection capacity.

Hence, when using Cor-Ten, especially in environments with highly corrosive atmospheric characteristics, (industrial areas or seaside locations), it is necessary to take into account the loss of material caused by corrosion and, if necessary, compensate for these factors by increasing the thickness of the sheet based on durability requirements. 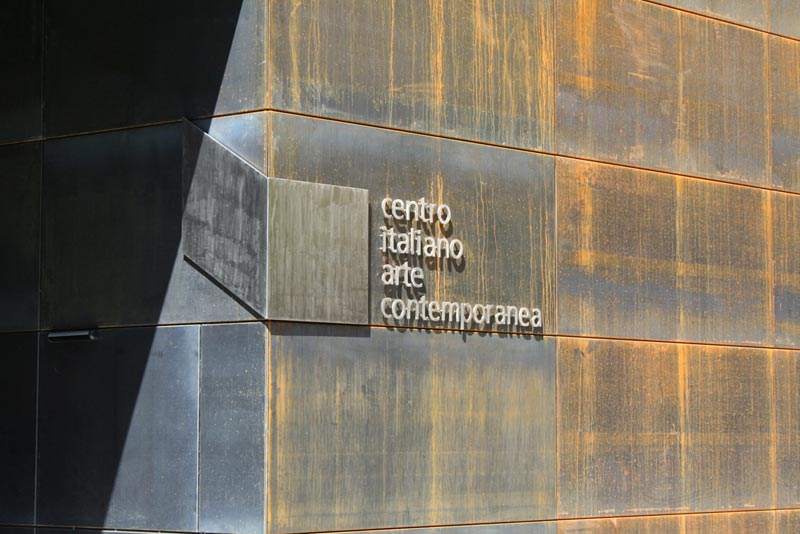 WHY USE COR-TEN AS A CLADDING MATERIAL?

Initially used for the construction of railway wagons for the transport of coal, over time, its use quickly spread also in the artistic and architectural fields.

The Cor-Ten sheet facade cladding is versatile and can be adapted to any type of building and geometry. It is often used as a modular element for the cladding of an external facade, where its oxidising finish is in continuous evolution. The aforementioned characteristics of self-protection against bad weather make this material particularly attractive for many designers.

Cor-Ten sheet metal represents an interesting option for architects, also due to the continuous metamorphosis that rusty steel assumes depending on the time, the amount of sunlight and the age of the material. The Cor-Ten coating can vary from the orange-reddish finish in the first stages, (6 months), passing through to a light brown to darker shade in the next few years (2-5 years), up to obtaining a purple-grey colour in a time span ranging from about twenty to forty years.

When Cor-ten steel is exposed to the open air, a normal oxidation process is triggered, causing the formation of a surface coating which, over time, gradually turns into protective rust perfectly adhering to the base metal, making it immune to the advancement of corrosion. The wonderful paradox of weather-resistant steel is that what protects it from rust is rust itself.

VERSATILITY AND EASE OF WORKING

Cor-Ten has a workability similar to that of normal steel. The sheets or strips can be cut thermally or mechanically using procedures similar to those used in structural steels of the same thickness. They are easily modelled and are used for architectural elements of all shapes and sizes.

Planar, curved or faceted, the cladding panels, more specifically, are worked, perforated, embossed or printed with different motifs, to create simple and complex geometries, which allow you to reach the required functional and aesthetic requirements. 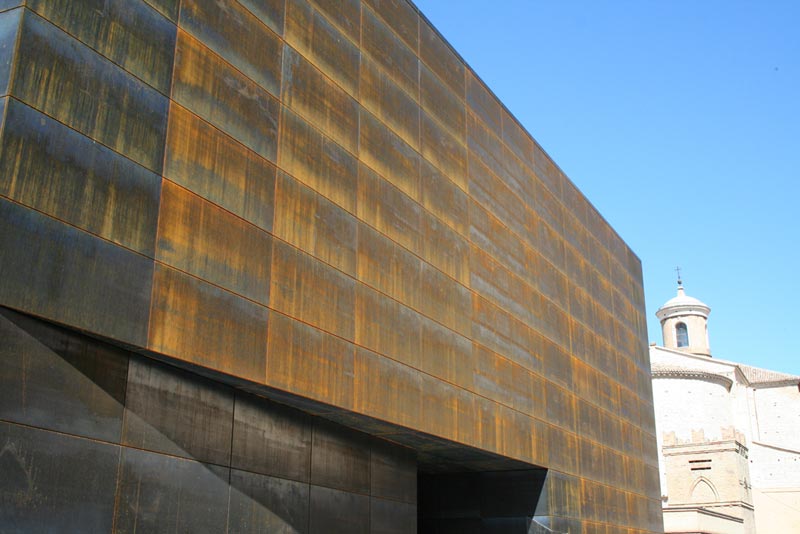 Cor-Ten steel is a material characterised by high durability and high performance, requires low maintenance and above all it is a 100% recyclable material.

The only form of maintenance required is the periodic cleaning of the facade, which consists in rinsing the surfaces, eliminating any contaminating residues. In the case of facade claddings, the rain is able to provide the necessary cleaning, keeping the coating resistant and compact.

After its life cycle, a decommissioned Cor-Ten sheet cladding can be recycled effectively at low cost, keeping its properties unchanged.

Designing an external cladding in Cor-Ten sheet metal panels requires a phase of study and evaluation of aspects that are crucial for the success of the project.

First of all, the concept should be reiterated that areas affected by sea air, heavy rains, humidity or persistent fog are not the ideal places to use Cor-Ten sheet facade, due to the corrosion effects of steel.

In industrial environments in fact, the surface coating is formed more quickly and is darker in colour compared to what occurs, for example, in rural areas. In seaside resorts, the formation of the protective coating may be slower due to exposure to sodium chloride. However, in both cases, due to the conditions just described, the coating might not adhere ideally to the metal substrate, resulting in the lack of corrosion protection properties that characterise Cor-Ten steel.

It should also be specified that there is no guarantee of the homogeneity with which Cor-Ten changes its colour with the passage of time. This could pose a problem, since, in the event of the need to replace a facade panel, it would be rather difficult to trace the matching Cor-Ten colour. 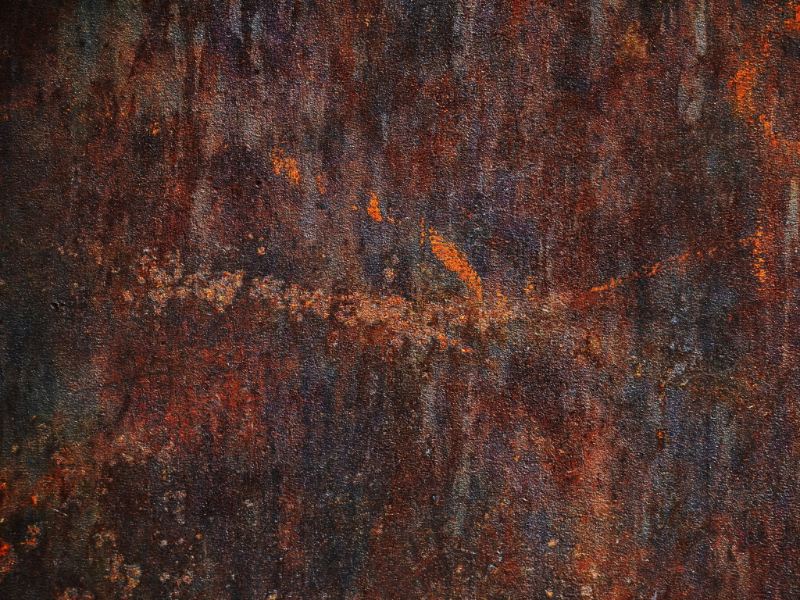 Regardless of the installation site, the material must always be kept clean, away from mud, grease, oil, paint, cement, mortar and other substances, in order to minimise contact with agents that could alter the natural oxidation process.

POOR COMPATIBILITY WITH OTHER METALS

In almost all cases, Cor-Ten steel used as a facade cladding is installed on a substructure, or in any case through a system of metal tracks. Joining metals of different nature can be risky: when two metals with different electrolytic potential come into contact in the presence of water, galvanic corrosion can occur.

The recommended option is to use weatherproof fasteners. If this is not possible, it is advisable to use nylon spacers inserted between the metal types to avoid direct contact between the materials.

It should also be said that, in order to safeguard the finish of the material, correct design and adequate management of the outflow of rainwater is necessary. All joints and profiles must be designed in such a way that rainwater can flow out without stagnating. It is important, in fact, to keep the material well drained and even out of contact with a pile of wet leaves. The oxidation process produced by atmospheric agents can cause rust-dirty water to drip onto adjacent surfaces and stain them permanently, or even worse, could cause pollution of the local aquatic environment. 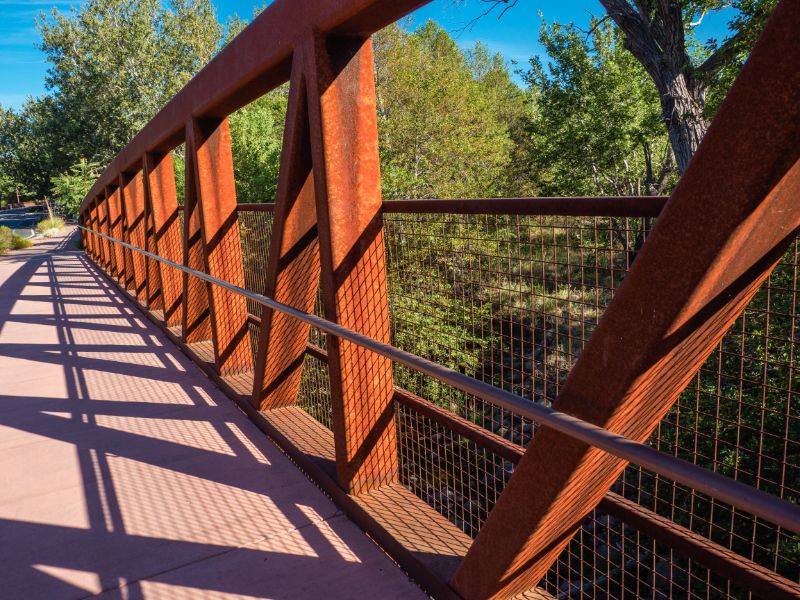 IN CONCLUSION: FROM THEORY TO PRACTICE

The highly expressive character of Cor-Ten, its dynamic reaction to external environmental conditions, which gradually change its colour over time, makes us think of the architectural facade, not as an artificial element, but as a living organism, suitable in different contexts of application and, for this reason, appealing to many architects and designers.

The use of Cor-Ten steel coatings not only has clear aesthetic benefits in terms of longevity, resistance and protection, but, by eliminating the need for surface treatments during the production and installation phases, the environmental impact is drastically reduced, as are, maintenance costs throughout the life cycle and those relating to the final disposal of the product.

That said, some studies have found that the additional quantities of nickel, iron and manganese deriving from the outflow of the water, in a building lined with Cor-Ten steel, are by no means negligible.

Despite the self-protective nature of the Cor-Ten metal, there are no official guarantees of weather resistance. Even the U.S. Steel Corporation itself does not recommend the use of Cor-Ten for architectural applications, in particular if used for external horizontal coverings or claddings. This does not mean that U.S. Steel Corporation does not endorse its product, nor that architects should not use it. Simply, it must be used in the correct way.