Outdoor decorative panels in sheet metal: projects to be inspired by

The contemporary architectural trend gives the external aspect of the building a new meaning, it becomes testimony to the visual and expressive culture, emphasising its formal character through its overall volume and, therefore, to the building envelope. The building must present itself with its best dress, what is of interest is the symbolic evocation and the visual impact that the building communicates to society. An evident contrast today determines the relationships between the materials used for the construction of the architectural envelopes: the veins of the marble or the naturalness of the wood are less and less important, what matters are the textures of the metals, the reflections and the technology applied to them.

Since ancient times, decoration has been a characterizing element of architecture. The buildings of a certain value and interest were enriched with two-dimensional and three-dimensional decorative elements, which made them unique.

In the facades, the paintings and mouldings were usually inspired by natural forms, applied to emphasise man’s dominion over nature.

The presence of decorations was a demonstrative act of the lords of the buildings, representing strength, power, and great economic capacity for the use of expensive specialised workers. At the beginning of the twentieth century, the industrial revolution and mass production changed this paradigm; suddenly the decoration became cheap and banal, thus changing the taste of the elite, up to the elimination of the decoration in architecture, as in fashion, design and visual arts.

“Ornament and Crime”, published in 1908 by Adolf Loos, is a text that has contributed significantly to the architects’ prejudice towards decorum. He was the first to introduce this form of radicalism in contrast to the eclecticism of the nineteenth century and Art Nouveau, influencing the principles of the nascent Bauhaus school and laying the foundations for a new conception of modernism. 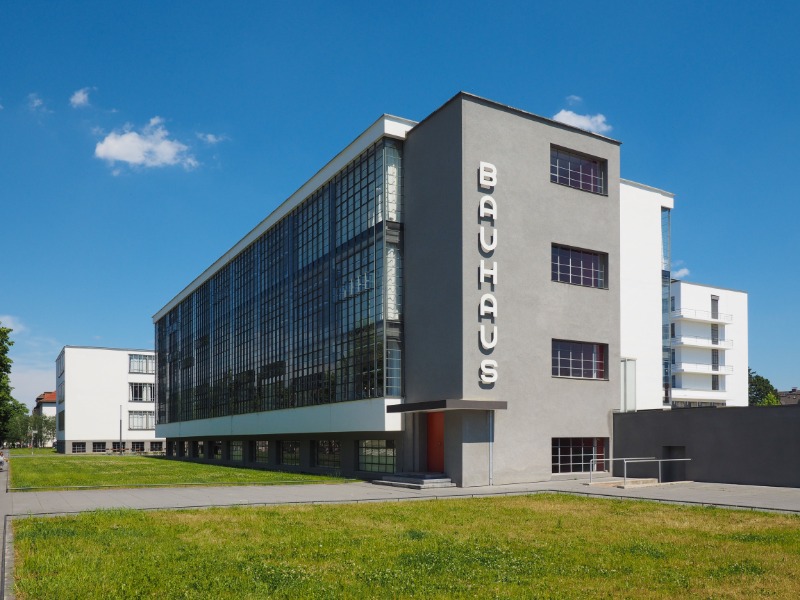 DECORATION IS BACK IN FASHION

In the early 1980s, architecture was changing the principles that had guided it for over a century, giving rise to a new concept of postmodernism. Decoration and ornamentation, once put aside by modernist architects, were making a comeback.

In this process of re-evaluation, there was the will to abandon the principles of purism to make room for architectures “decorated” with new symbolic meanings. Thus, a meaning of decoration applied to architecture emerges, as the final outcome of methodologies and techniques adopted during the design process.

Technological innovation has introduced a new perception of the ornamentation, leading architects towards unexplored aesthetics, thanks to the use of increasingly complex architectural forms, conceivable only through the introduction of new digital models.

The design and manufacture imagined through the use of specific software have allowed the creation of ornamental surfaces consisting of weaves and textures that could have never been handcrafted.

Numerical control machines, 3D printers or even robotic arms are some of the technologies used for architecture, although they are tools that still require further study to be used in architecture globally.

The increase in complexity, the discussion about the function of decoration and its meaning also involved the technological system of the facade. The building envelope becomes an opportunity for architects of applied research, not only towards new forms, but also towards materials used differently than in the past.

Metals for example, not only used in their structural function, but also in that of decoration and finishing, thanks to their ease of processing and assembly, flexibility of use, durability over time and resistance. They adapt to new digital design models and are an expression of a new contemporary language.

The metallic decoration assumes not only the ornamental function, but also a functional role in the building.

In fact, the decorative motifs can be useful to hide the technological systems or the emergency stairs, they can contribute to the ventilation of the interiors and the facades themselves, improving the energy efficiency of the buildings, or they can take on the shielding function to control the radiation of the summer sun. 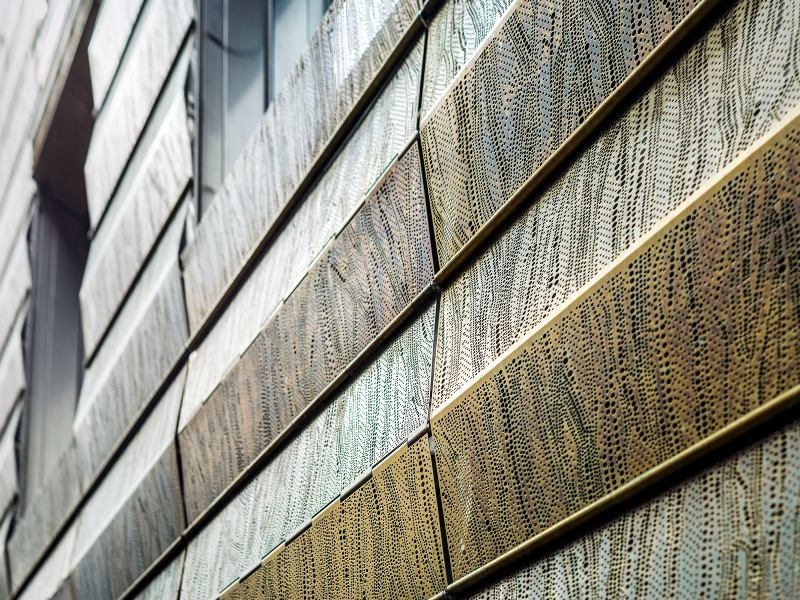 Trollbeads House, by the BBP Arkitekter studio, is located in the centre of Copenhagen and is an urban redevelopment project of a building that houses the headquarters of a Danish jewellery manufacturer. The dynamic envelope is capable of adopting different configurations at various times of the day, thanks to a mobile metal shielding system, located in front of the curtain wall facade.

The innovative decorative system is inspired by the idea of a thorny hedge to protect precious objects inside the building. The panels are equipped with a motorised system which closes automatically at the end of each working day, transforming the building into a real protective shell.

The metal cladding wraps the building like a curtain, taking on different functions throughout the day. Every morning, the tent opens halfway to let the building simulate the configuration of the neighbouring historic houses formed by repeated windows inside a massive wall. After working hours, the curtain closes automatically and the curtain takes on the role of intrusion protection. At night, the light comes inside the building revealing the strongly modern character of the building.

The curtain system consists of prefabricated panels made of a special copper and aluminium alloy, characterised by a dynamic motif consisting of holes of different sizes that allow light to pass through. The collapsible panels are guided by a spiral track, robust and requiring little maintenance. 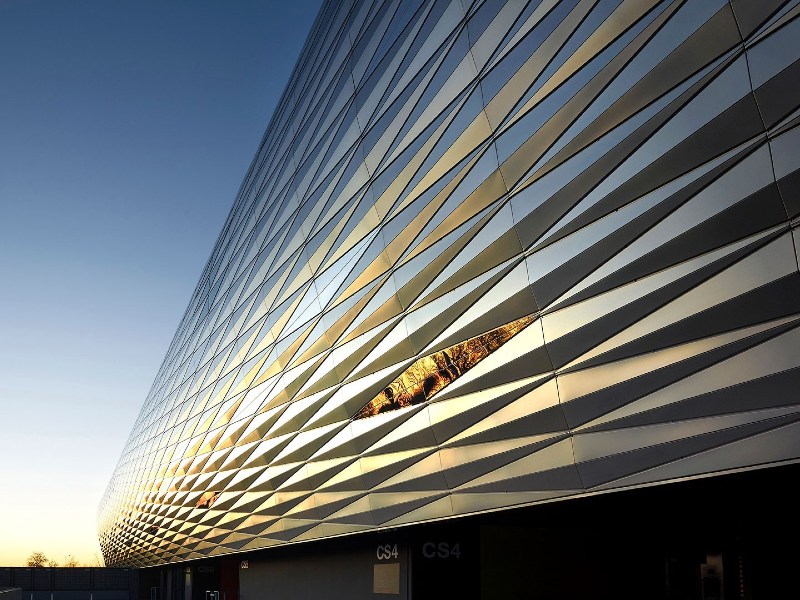 The Dacia Arena, designed by the Archea Associati studio, is the new Udinese Football Stadium inaugurated in 2015. It is called “the diamond” because of the shape of its shell. It consists of over 10,000 stainless steel split tiles laid to take on a three-dimensional configuration and it is capable of receiving and, at the same time, refracting light, just like precious stones.

The desire of the designers is in fact to make the most of the potential of the material, obtaining a dynamic envelope with respect to the surrounding environment, capable of reflecting the colours of the sky and the context in which it is located. The metal surface is formed by a module consisting of 10 vertical bands that repeat one after the other. Inside the module alternates elements in satin and reflective steel. 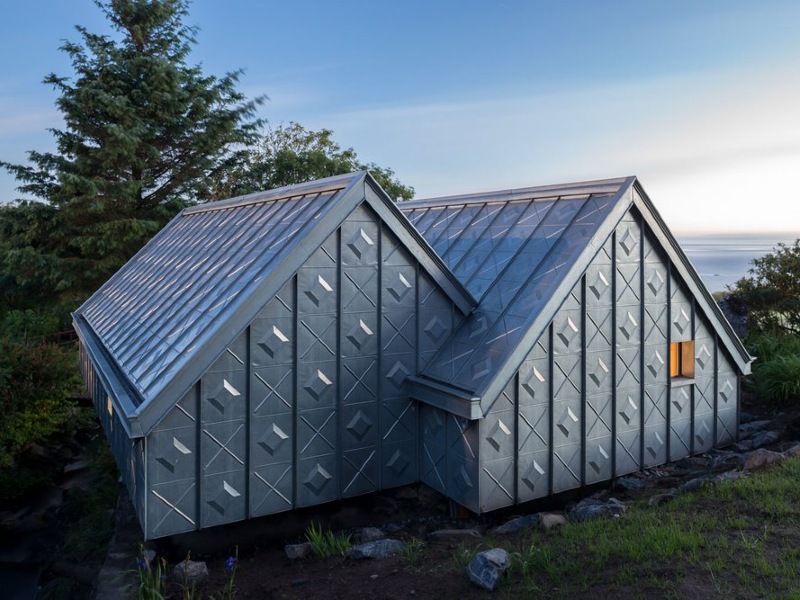 In Great Britain, the Midden Studio project, conceived by the Weave studio, was completed in 2015. The building, which houses an artist’s laboratory, is located on the west coast of Scotland, near a rushing spring watercourse, the Allt ant-Sionnaich.

It stands on the ruins of an old wall of a building previously used as a deposit of manure produced by the neighbouring stables.

The new studio has a hard and imperfect appearance, it seems to float above the watercourse, it is characterised by pure and elementary shapes, by imposing tympanums and by the original mouldings that recall the granite stone that surrounds the building, taken from the decorative motifs of the facade.

The external cladding, made of natural zinc, is also inspired by Italian historical architecture, reminiscent of Palazzo dei Diamanti in Ferrara or the church of Gesù Nuovo in Naples.

The ornamental motif, compared to the historical architecture of reference, is reproduced in a more severe tone and is composed of ashlar zinc lozenges, which, over time, change their appearance becoming a “natural” element integrated into the landscape. 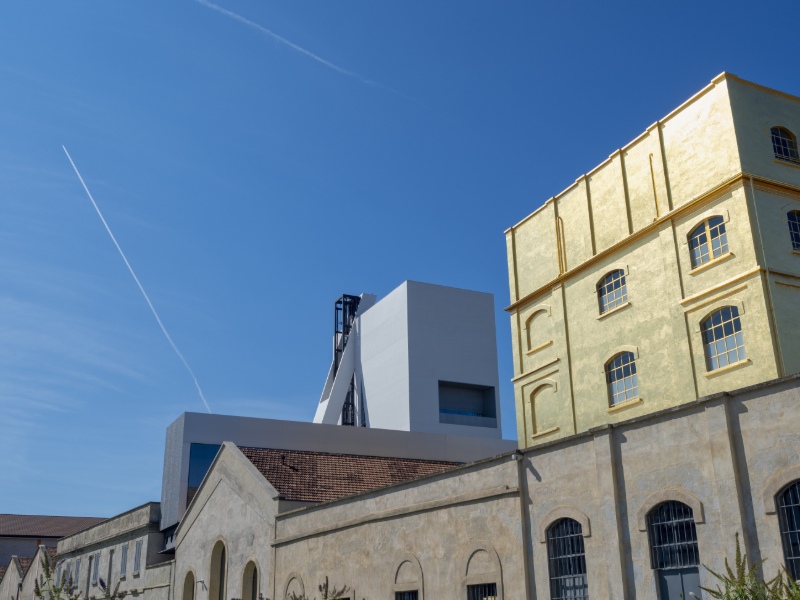 Although we are not dealing with a traditional laminate panel, the material used for the Fondazione Prada project represents a noteworthy example for the use of metal for decorative purposes.

The building, located in Milan and designed by Rem Koolhaas’ OMA Architects studio, uses over 6,800 m2 of aluminum foam material for the cladding of the facade, the internal walls of the ceilings and the roof.

Aluminum foam is an extraordinary and versatile material, lent to the world of design and architecture with excellent results, both in functional and aesthetic terms. In fact, in addition to its unique expressive character, it has good sound-absorbing properties and therefore ideal for facade and roofing applications. The material used for this project, in addition to having a decorative character, is available in resistant but light panels, non-flammable and 100% recyclable.